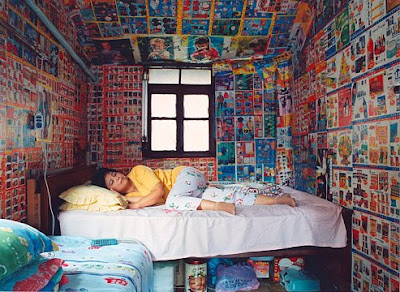 When viewing ICP's most recent exhibition, Dress Codes, I was not blown away. There is, of course, amazing artists represented within the show- Martha Rosler, Hank Willis Thomas, Lorna Simpson and many more. The curation, overall, felt a bit didactic and did not push too many new ideas out into the world. Maybe too many curators were involved and it felt a little modge-podgey? Or, fashion might just not be my thing...

But, I did discover a gem. Hu Yang is someone I have been exposed to once or twice but I really got a sense of his work in this show and I am impressed and excited.

Very nice multi-media piece made by the New York Times can be viewed here.

In early 2004, photographer Hu Yang began documenting the lives of ordinary Shanghai residents. He originally planned to include 100 households in his survey, but over the course of the year 500 families allowed him to interview and photograph them in their homes. Unlike the New York Times' Faces of Shanghai slideshow, which focused on the middle class consumer culture, this project covers Shanghai residents from a surprisingly wide range of backgrounds. From poor migrant workers to expats to billionaires, nearly all of Shanghai is represented.

While Hu Yang says he hoped to demonstrate some of Shanghai's social problems, such as the gap between the rich and the poor, he presents his work without editorializing. Every photo could stand alone as a candid family portrait. 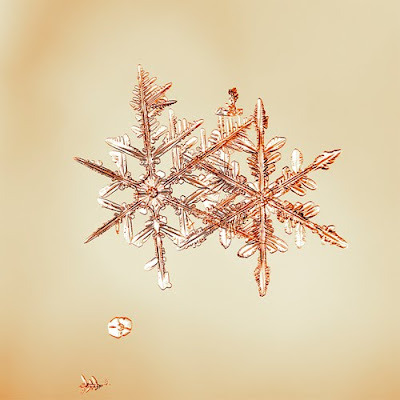 HAPPY HOLIDAYS EVERYONE! Off to see family for a few days...and hopefully get a little R&R, but will report back to the blog soon! Have a wonderful time doing whatever it is you do!

starting to lose it, need to relax. 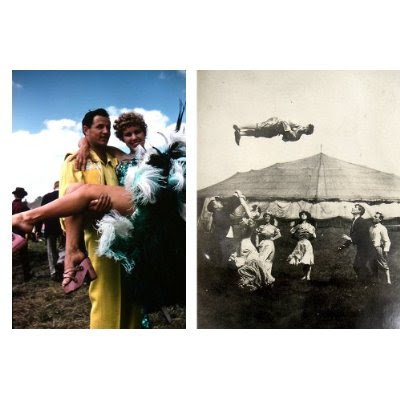 nice images, eh? wish i had the book they came from....

...would help with my current insanity.

exhibitions i want to see while in nyc... 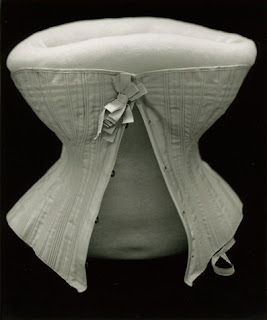 Tanya Marcuse
Corset with Silk ribbon, 1880s, from the series Undergarments and Armor, 2002–2004
© Tanya Marcuse
Courtesy the artist and Julie Saul Gallery, New York
can be seen in Dress Codes.

Dress Codes: The Third Triennial of Photo and Video at ICP. Tanya Marcuse is one of the many amazing artists represented. I had the opportunity to work with her this summer on a workshop and she was brilliant. Love her work. Always inspired by the triennials. Ecotopia (the last one) was o.k. but I still think Strangers (first one) was incredible! I am hoping Dress Codes is even better.

Looking in: Robert Frank's The Americans at the Met. Marking 50 years since this was published. Wow. 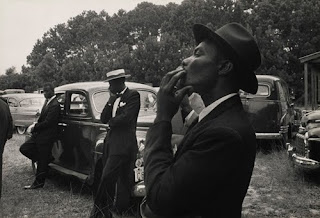 
so many more but this is a nice start. anyone have other suggestions for me?

Photograph © Robert Frank, from The Americans
Posted by Elizabeth No comments:

I am so happy to announce that I have been accepted into the New York Foundation for the Arts MARK program.

A brief description from their website:
MARK is the New York Foundation for the Arts'(NYFA) new statewide six-month program for visual artists who want a unique opportunity for individualized focus on the professional side of their creative practice. MARK is designed to address the concerns of artists living outside of New York City while providing them with a new network statewide. Participating artists can expect MARK to spark goals and help to define concrete steps while providing individual and group feedback on how to better present yourself.

What this means for me is that I get a time, place and platform to learn how to self promote, better articulate my ideas, and discover who the audience is for my work and try to tap into it. Mostly, I look forward to meeting the other artists who have been selected and hearing their feedback, seeing their work and developing new friendships, and connections with my beautiful Hudson Valley community. This definitely feels like a step in the right direction for me.

On this note, I have been working on my website and am ready to share it. It is far from completed (lots of work has not been posted yet and the design is still questionable) but I am ok with it being seen as an unfinished project. So, please, if you have any feedback or suggestions they would be greatly appreciated. You can check it out here.
Posted by Elizabeth 1 comment: