Devorah Sperber at SUNY this week 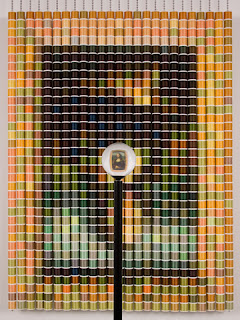 Mona Lisa by Devorah Sperber
DEVORAH SPERBER
Devorah Sperber has been selected as the Visiting Artist at SUNY Ulster for the 2011 spring semester. 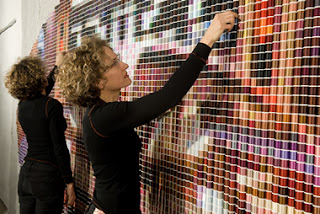 Devorah Sperber was born in 1961 and raised in Detroit, Michigan and Denver, Colorado. From 1979 to 1981, she attended the Art Institute of Colorado, Denver, and in 1987, she received her BA from Regis University, Colorado. She has had numerous exhibitions including Mass MoCA, (2008), and a one-person exhibition,The Eye of the Artist: The Work of Devorah Sperber, at the Brooklyn Museum of Art, New York (2007).

Artist’s Statement
"My current body of work consists of sculptures assembled from thousands of ordinary objects - spools of thread, marker and pen caps, flower-power stickers, map tacks, chenille stems (a.k.a. pipe cleaners), faceted beads, and Swarovski crystals. The imagery is derived from digital photographs that I manipulate and translate into "low-tech" pixels.

While many contemporary artists employ digital technology to create high-tech works, I strive to "dumb-down" technology by using mundane materials and low-tech, labor-intensive assembly processes. I place equal importance on the recognizable image as a whole and on how individual parts function as abstract elements. Therefore, I select materials based on their aesthetic and functional characteristics as well as their capacity for an interesting and often contrasting relationship with the subject matter.

The thread-spool works are often installed so that viewers first perceive the spools of thread as a random arrangement of colorful cylinders. It is only after the spools are viewed through an optical device, such as a clear acrylic sphere or convex mirror that the recognizable image emerges. The viewing spheres (or convex mirrors) shrink or condense the thread spool "pixels" into recognizable images while also rotating the representation 180 degrees. This shift in perception functions as a mechanism to present the idea that there is no one truth or reality, thus emphasizing subjective reality over an absolute truth." - from the Museum of Arts and Design website.


Learn more about her work here.
Posted by Elizabeth